It’s been something that Florida State Seminoles football tight end Camren McDonald has been working towards since high school — the chance to capitalize off his success and personhood.

Forward-thinking, the California native had begun to put in the work to build his brand well before the state of Florida or the NCAA made a path for him to generate income. McDonald also took the time to emphasize the importance of establishing a personal brand to his teammates, something that’s been recognized.

“It’s been a long time coming,” McDonald said during a phone interview on Thursday. “When I first started the brand-building process in high school, I wasn’t expecting to be able to profit off it in college.

It’s nice to be able to see the fruits of my labor.”

Before midnight struck last night, McDonald tweeted out a promo announcing the launch of CM Apparel, a merch company of his own that’s partnered with Playbooked (a NIL service) and Boosted (originally formed to assist eSports athletes). 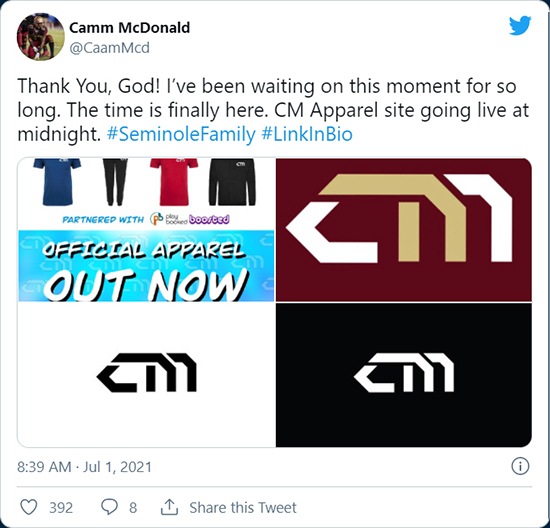 In addition, he (alongside several teammates) have signed up for the McKenzie Milton co-owned platform Dreamfield, which helps business book athletes for sponsorships or events.

It’s an opportunity that McDonald doesn’t take for granted, one that he calls humbling.

“Just look at all the former players in the past, they weren’t able to profit off of their names…and now we can. It just….it means a lot to us.”

Florida State was uniquely situated to deal with this new era of college athletics, having put in the work to educate athletes on financial literacy through the Secure the Bag program with Didier Occident.

“What he’s taught us along the way, for me since my freshman year, is finally going to come to fruition,” he said. “Because of that education, the money we’re going to be getting is going to be spent and saved in the right way.”

One of the ways that McDonald intends to use his profits is to further the social work that he’s made part of his personal brand as much as football. In 2020, after heading home and seeing the effects of the pandemic, he launched a non-profit called To Rise and Progress and intends to use profits from his deals to further that mission.

To Rise and Progress is a 501(c)3 tax exempt non profit organization formerly known as The Making Change Foundation. Our mission statement reads “Through partnerships and the means of the foundation we will attempt to change the lives of as many individuals/families to the best of our ability. Our goal is not to be confined to a specific cause, rather it is to help whoever, whatever, whenever, and wherever. Our work will provide immediate needs for the inhabitants of planet Earth. The ultimate goal is to make the world a better place by any means necessary.”

“A percentage of all the proceeds that I make from NIL is going directly to community service because I was paying for everything out of pocket — not that I was upset or looking for recognition, it was just something I always wanted to do. Now that I’m able to generate some income, I’m going to be able to invest right back into the people that invested in me.”

CM Apparel is just the beginning — something that was ready to launch day one because of the groundwork on McDonald’s part. He’s got his fingers crossed for more opportunities to come into fruition, and in true influencer form, he made sure to say that the news would be dropped on his Twitter account.